This 18,5 m long clipper, weighing 24,5 ton, was built in Singapore in 1978 and first set sail in December, that same year. She was the first wooden clipper in Singapore that had aluminium masts and spars.
The clipper was harboured in St. Martin, where it got caught in hurricane Luis on September 5, 1995, one of the strongest hurricanes during the 1995 Atlantic Hurricane Season. The clipper was picked up by the hurricane and got hurled on land. Fortunately, only the haul was damaged. The sturdiness of the clipper interested Mr Fennell, who bought her and gave her a new life and name. The clippers original name “Kuan Yin Lady Victoria” was transformed into “De Gaper” and sailed to the harbor of Enkhuizen, Holland. Suddenly the owner met the clippers former owner, a drug baron, who claimed that the clipper was still his and the sale was false, because he wasn’t present at the time. After juridic fights, the baron was proven wrong and the clipper stayed in Enkhuizen. Here she had a big break until 2003, when a new owner bought her. She was occasionally rented to family and friends and made many trips along the shores of Holland and England. One of those renters, Mr Kuipers, fell in love with the clipper and decided to make an offer. One week after the offer was made, the owner passed away. Some weeks later, the owner’s daughter responded and the transmission was made. Because the clipper was in such a poor state, it is now being renovated, with extra care for the exterior. Mr Kuipers gladly helps along with the process of renovation and experiences a pleasant working environment.
The clipper is one of her kind and has sailed quite some distances.

admin Posted on juni 30, 2020 Geplaatst in Projects No Comments 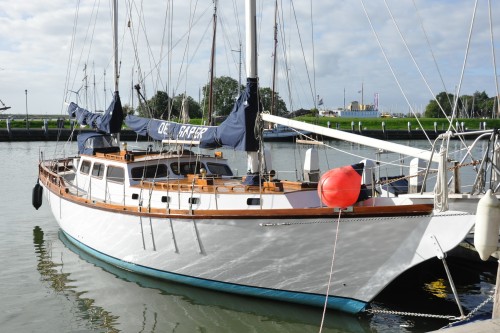