The 26,5m long Lallie was build in 1908 by Philip & Sons in Darthmouth UK.She was fitted with 3 paraffin engines after being towed to Clyde in Scotland. She was built as a yacht for use on the Caledonian channel, hence her shallow beam (4.20m)
She has such a long history that most of it consists of rumours, such as her service during World War II. Yet, it has been confirmed that she was the vacation house of a family in France, who took excellent care of her, using her frequently on holidays. At the moment she still has the same purpose, as she’s being used as a family yacht during summer vacations in the Mediterranean Sea.
Her last refit was in 2005, when she gained 2 new 220hp Baudoin diesel engines.

admin Posted on juni 30, 2020 Geplaatst in Projects No Comments 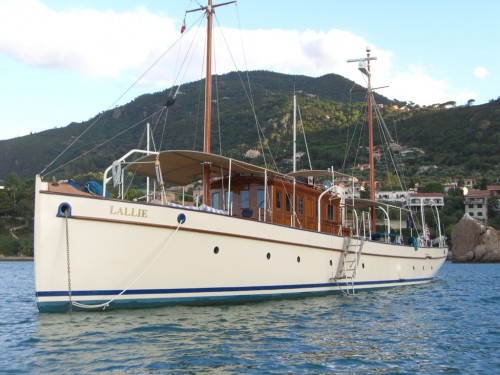